A surge in digital

As already mentioned in an earlier post Chinese are reading books indeed but with a considerable increase of digital. The China e-book market is getting very big indeed.
Again here some data from 2017 showing the boom.

The publishing industry has gone digital in a big way, spawning a market comprising 300 million users of mobile devices who read electronic books in China.
The market, which has two key sections in hardware (reading devices) and software (e-books), reached about 12 billion yuan ($1.7 billion) in sales in 2016, up 25% year-on-year, according to a report by the China Audio-Video and Digital Publishing Association.
Three million e-book reading devices were sold in 2011. But the figure declined to 1.89 million units in 2013, only to rebound later, with annual growth rate exceeding 15% in 2014.
In 2015, 2.26 million e-book readers were sold; the figure rose to 2.34 million units in 2016.
Amazon announced a strategic partnership with Migu Culture and Technology Group Co, a subsidiary of China Mobile Communications Corp, and also launched a feature-rich Kindle created exclusively for Chinese readers.
The device presents more than 460,000 Kindle e-books and over 400,000 online literature titles from Migu, one of the largest online literature platforms in China.
The made-for-China Kindle X Migu device retails for 658 yuan. “China has become the largest market in the world for Kindle and enjoys a very strong growth momentum,” Amazon China.

Amazon is not the only company betting big on e-book readers in China. Beijing-based iReader Technology Co Ltd released its latest e-book reader called the iReader Light in early September 2016. The device weighs only 142 grams, and is priced 658 yuan.
iReader Technology said more than 100 million people across 150 countries use the iReader to read e-books each month.
Online shopping major JD.com Inc launched its JDRead last year. Priced 769 yuan, the JDRead device can access about 300,000 e-books.

Male users outnumber female users in China, and all of them are younger. In this respect, the China market is different from the US market where 70% of users are female and older. 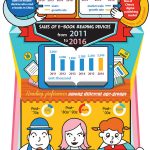 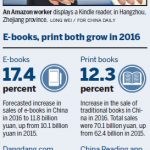 A new business has emerged in China that makes money by serializing and publishing digital literature, including novels, for users of hand-held devices.
Aspiring authors now serve numerous literary works to millions of online readers through platforms such as China Reading, a literature-focused arm of Tencent Holdings Ltd, which is best known for its all-in-one app WeChat.
Founded in 2015, the Tencent company boasts 4 million novelists on its contributor list and 600 million users in China. The more than 10 million original novels for which it holds rights span nearly 200 genres.
A recent report by iResearch Consulting Group said a growing number of Chinese are reading e-books on mobile devices rather than PCs. Some 265 million Chinese read e-books on mobile devices and 217 million read e-books on PCs, it said.
In 2016, China Reading paid nearly 1 billion yuan to novelists, which proves the company owns a mature business model to support the operation, said iResearch.

Dong Qianqiu, at iQiyi.com Inc, said during an annual technology and entertainment conference in early June 2017 that online literature would become the mainstream in the future.
“The internet not only works simply as a medium but appears fashionable, trendy. With more than 300 million users who love reading digital literature, the market is worth 10 million yuan in China. Powered by online subscriptions and copyright trading models, the online literature market will grow rapidly in the future.”