On 9 December Sun Bin published the first of a series of articles (in Chinese) related to her grandfather Sun Bingwen.
Title in Chinese: 百年潮丨孙冰：爷爷孙炳文的壮怀一生
Link: https://mp.weixin.qq.com/s/hgiN-zM1uzgaVUEvwl6deA

“The life of my grandfather Sun Bingwen” by Sun Bin.
See attached the PDF, for those who cannot open the link:

Here a free translation of the introduction in the article 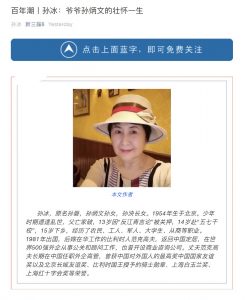 Sun Bin, formerly known as Sun Pan, is Sun Bingwen’s granddaughter. Born in Beijing in 1954. When she was a teenager, her father died and his family broke down. At the age of 13, she was detained for “anti-Jiangqing speech.” At the age of 14, she went to the “May 7 Cadre School.” At the age of 15, she went to the countryside. After leaving the country in 1981, she was married to a Belgian who works in China, Gilbert Van Kerckhove, and returned to China to settle down, engaged in public relations and consulting work for Fortune 500 foreign companies, and also established business consulting company. Her husband, Gilbert Van Kerckhove, has been a senior executive of foreign companies in China for a long time. He has won China’s highest award for foreigners, China National Friendship Award, Beijing Great Wall Friendship Award, Knight Medal from the King of Belgium, Shanghai Magnolia Award, Shanghai Red Cross Awards.

Note: the birth year mentioned is 1954 but it is officially 1955. One of those incomprehensible Chinese confusions. Don’t ask… And her official English name is SUN Bin, not Bing.

The book about Sun Bingwen

She was however not too happy with the editing done and decided to rewrite a lot. This is just the first segment, more to come about her family.
And do know, I have no idea what she wrote.