I remember I secretly read a Dutch version of Lolita by Vladimir Nabokov I found at home when I was like ten years old. It left a deep impression, pretty sensual. However, in the mist of times, I did not remember any details. I also guess it was not a complete translation and probably edited.

So I finally read the original in English. 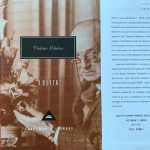 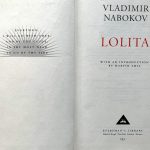 Let me say I was somehow disappointed. I did not feel that same sensuality. Yes, it is considered a masterpiece but there is a lot of rambling, excused, because it reflects the mind of the protagonist. I missed the details of what really happened in bed. Too many vague and confusing hints. Being very open-minded I was not “shocked” by the story, or would I say I was not shocked enough.

Not that I condone the acts of the protagonist. It is definitely sick and immoral.

Somehow it reminds me of the movie “Last Tango in Paris”, a movie that also left me a deep impression, and where I do not have the same negative comments about the protagonist. I would like to watch it again with a decent translation in English. I recently saw the DVD but it was only in the original Italian version and a lot of the conversation I could not understand well and I think it is very important to hear the full version. And yes, some impressive and sensual scenes. A great movie.

For me the book Lolita had such a worldwide impact because it was ahead of its times, but yeah, I expected more. Still a recommended read.

In my Lolita hard copy I kept a book review published in the New York Times on 25 September 2005. That was to commemorate the 50 years since its publication. 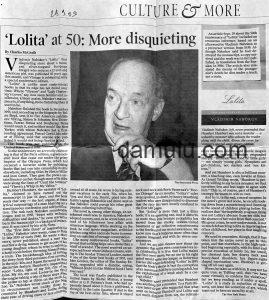 I guess a much better insight than mine.
For those who cannot retrieve the original article, see here the PDF: