As reported earlier I found her book back in my library, unread: Socialism is Great by Lijia Zhang. The title is clearly sarcastic…

Well I finished it, it took longer than I thought as the book is pretty long (358 pages of small print). Again, very impressed.

I expected something else but found out it is a meticulous narrative of her youth, a personal diary. She tells her story struggling to find her way inside a Nanjing government factory, trying to get a better education, going through love affairs, and trying to get a new life, well away from that dreaded factory work and her rather conservative and very modest family circle.

She shows how China changed from the early eighties to what it became later after the “opening up”. A period familiar to me as I arrived in China myself in late 1880.
So, many of the stories and facts she describes are all too familiar to me and I can say it is all very accurate. The eighties were years of fast changes but it was not everywhere at the same speed. In her surroundings it took longer than it did in the big cities like Beijing, Shanghai and Guangzhou.
She gives as such an interesting insight on how China was a few decades ago. It was at times very difficult. Like when she had to see the “nurses” in her factory to prove she did have her period. Difficult to imagine all that today.

I admire or rather cannot comprehend how she can remember so many small details of her daily life, from decades ago. I feel depressed as I am a total failure in this respect. 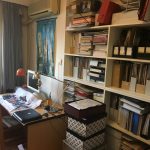 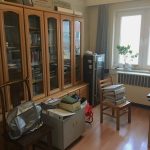 A view on some of my paper mountains to clean up

I am now trying to dig up documents in my office trying to remember stuff that happened. Or going back to old pictures, where I often have no idea who is who. Well, not motivating for me… I feel I cannot remember well the details of the stories I want to write about. Giving a seminar about it, public talking is one thing but putting it on paper…

I strongly recommend the book. Well written, many interesting historical facts. I was only disappointed by the ending: I wanted to know what happened later… Because she married, had children and separated from her husband, but I am not clear about all that. Just plain curious.