As mentioned in a previous post, I needed to read again “China Mission Impossible” by Rainer Thomm. As far as I understand got his book on 31 January 2008. In the mist of times. But I found back the details, it was an event organized by oriented.com (http://oriented.com/), a global network of international professionals. The event was in Block 8 (near Chaoyang Park).
It was announced as “APEC presents the International Career Fair 2008 with ORIENTED, LinkedIn, The European Union and more”. No pictures. 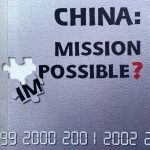 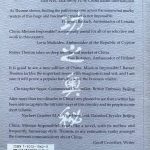 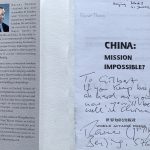 His books: China: Mission Impossible – Business China: A Practical Insight Into Doing Business in China – China in the Fast Line – Chasing the Dragon.

Many of his books are however not available anymore. See the intro about him on Amazon (outdated – edited):

Rainer Thomm studied law and economics in London and Vienna and trained as a lawyer in London.
He served as an executive with major banks in Europe, Australia and Asia. In the early to mid 80’s, he was instrumental in building up the Asian investment banking business of foreign firms, and joined the board of a joint venture leasing company in Beijing.
His consultancy work was focused on supporting investors in developing suitable strategies for the Chinese market, identifying suitable Chinese partners, bridging differences and building relationships. His clients have included financial institutions and industrial companies as well as small and medium-size enterprises and individuals.
Rainer Thomm is the author of “Doing Business in China” and “Win/Win in China!” as well as numerous articles for periodicals and newsletters.

Made it to the end. A few comments.
Overall a well done ABC on how to behave and do business in China. It was published in 2000, so today some of the practical tips are outdated, and the China business environment has changed, not always for the best. So, in some way the picture today is less rosy than in 2000.

However many of his observations and recommendations are still valid today.
I liked this statement:
“Anybody not ethnic Chinese in China is welcome as long as he behaves as a guest, but he will never be really part of Chinese society”.

Oh so true, let those “sinologists” tell you the contrary but after 40 years here, having an impressive track record and many Chinese “friends”. I do agree with the statement. We are “tolerated” as long as we are “useful”.

He also stresses the importance of using professional and PAID help to operate successfully and to avoid mistakes and spend money blindly. That is today even more valid.
Also he underlines the importance to have the backup from the head office, not changing the local representative in the wrong assumption Chinese deal with the company, not an individual (Oh so wrong!).
I could only suggest he updates the book to … twenty years later…

One thought on “China Mission Impossible”