On 28 March I will finally introduce my book to the American Chamber. Good it is now for sale in The Bookworm! I must admit I am pretty nervous about the talk. People always assume “I talk so easily” but few realize what it takes…
AmCham’s own introduction:
Toxic Capitalism: Environmental Pressures from Excessive Consumption
You are invited to join AmCham China at a luncheon with Gilbert Van Kerckhove, who will discuss his recent book “Toxic Capitalism – The Orgy of Consumerism and Waste: Are We the Last Generation on Earth?”
China’s economic slowdown since the global financial crisis has led many economists to believe that only a fundamental shift in its economy will drive future growth. Less reliance on external factors like foreign investment and export driven growth, and a greater focus on internal ones–particularly domestic consumption–should result in a more sustainable growth model to guide the world’s second largest economy in the coming decades.
While these plans for rebalancing call for increased domestic consumption, the energy and resources necessary to fuel greater consumption for China’s population of 1.3 billion would likely put a great strain on the environment. Rising pollution levels and the impact of “toxic capitalism”- overconsumption and indiscriminate wastefulness – exacerbate the environmental problems that China already faces.
Speaker:
Gilbert Van Kerckhove, president and founder, Beijing Global Strategy Consulting
http://www.damulu.com/toxic-capitalism/

On 30 November 2012 WAB organized a one day event, with the slogan “CHANGE”, the 2012 Global Issues Conference which involved all students in the Middle and High School. They had found me through my book’s website and invited me to talk for nearly one hour, to introduce my book.
It was a very different and unique experience for me, going to this enormous Western school complex in Shunyi – they have far over 1,000 students. Very modern, great atmosphere. Today’s kids don’t know how lucky they are, in my time things were really very “basic”, the least to say.
I first joined the opening ceremony in their gym which included over 800 middle school and high school students and teachers. See the crowd. The speakers were very interesting and I only felt pity I could not listen to the end and meet them. Their topics were pretty well related to the themes in my book.
My talk was in the Blu Theater. The student audience was from Grade 9 to Grade 12 – with an age range from 13 to 19 years old. All students were high school students and a mixture of female and male. The Grade 11 and 12 students mostly take Economics; Environmental Science and other Scientific subjects. 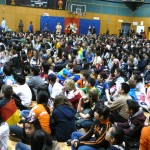 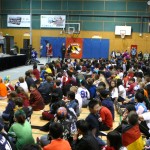 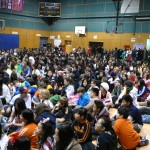 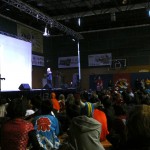 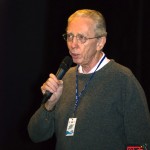 After that I joined the enormous buffet lunch, where the parents from many nationalities were offering dishes, snacks and more at their individual stands. The choice was just too overwhelming. Great idea, just noticed there was no Belgian stand – there was a Dutch table (bitterballen!).
I also bumped into my old friend Richard Liu who works there.
Great many thanks to Suzi Roberts, Lorraine Mc Mullen and Echo Cai, and all who gave me such a warm reception.

In the Israeli embassy

On 17 December 2012 I was kindly invited for a book presentation to IsCham Beijing, to introduce my book Toxic Capitalism during the Beijing Annual Gathering and the inauguration of the new board members. IsCham: the Israel Chamber of Commerce in China.
Thanks to Fani Gurevich Bar, Ilil Bar Gat and all others for their assistance.
I had the opportunity to give a signed copy of my book to the ambassador, H.E. Matan Vilnai.

Speeches were given by the ambassador, Fani, Mickey Mushinski.
My talk lasted 43 minutes to introduce the main points of my book. 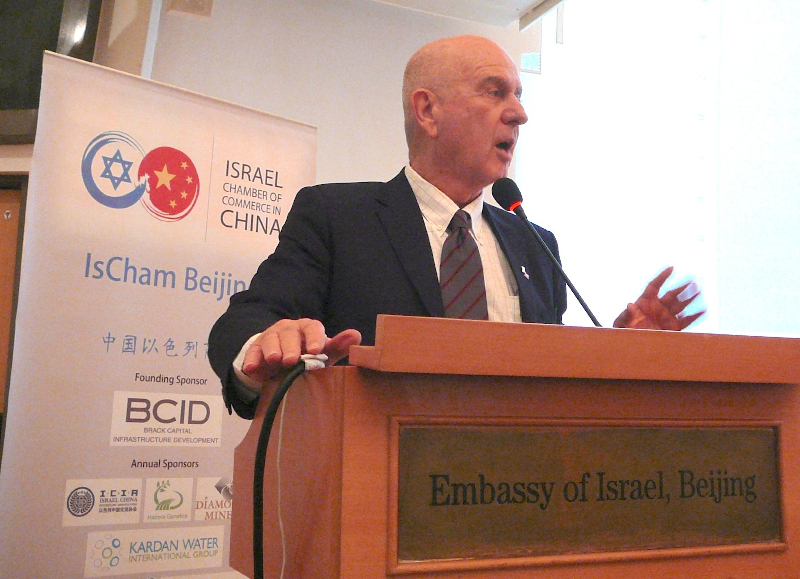 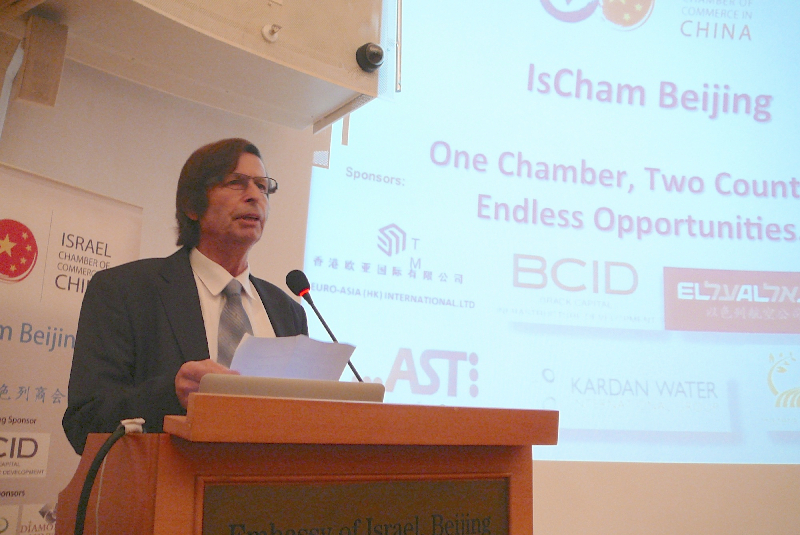 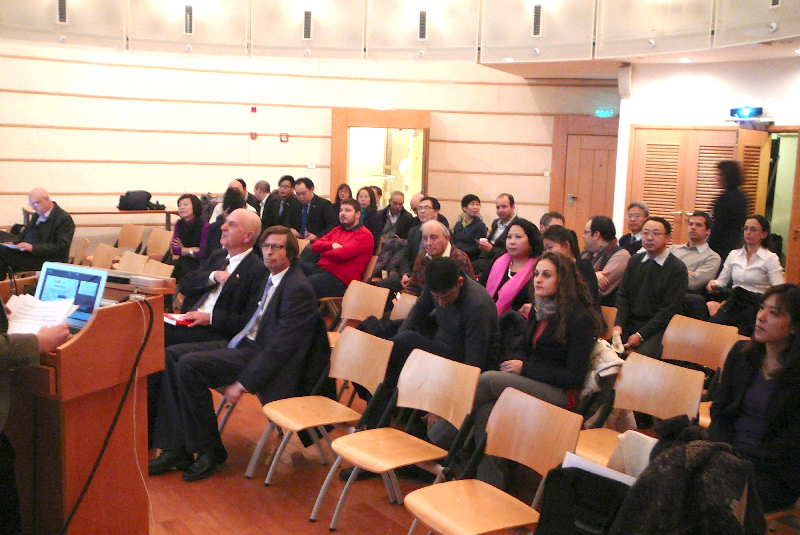 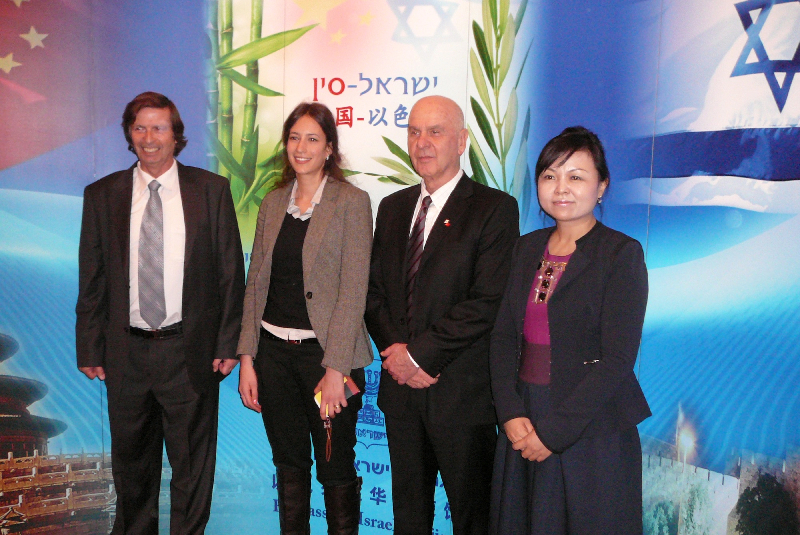 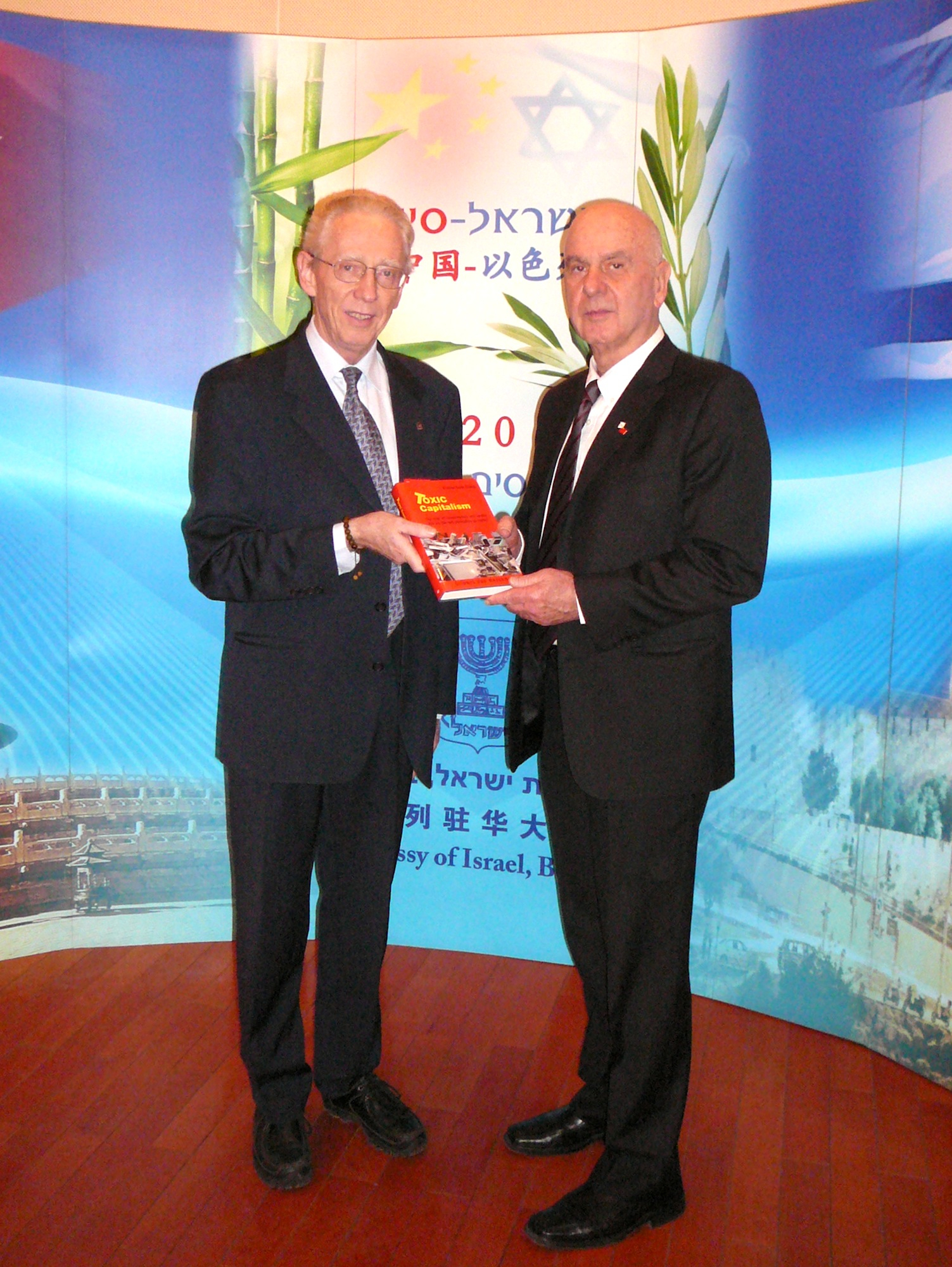 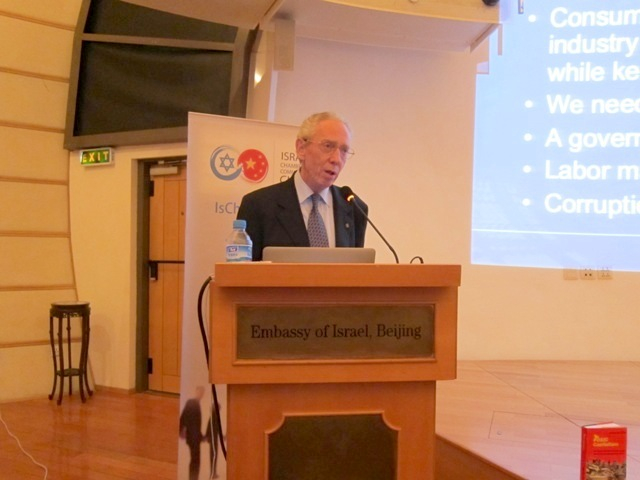 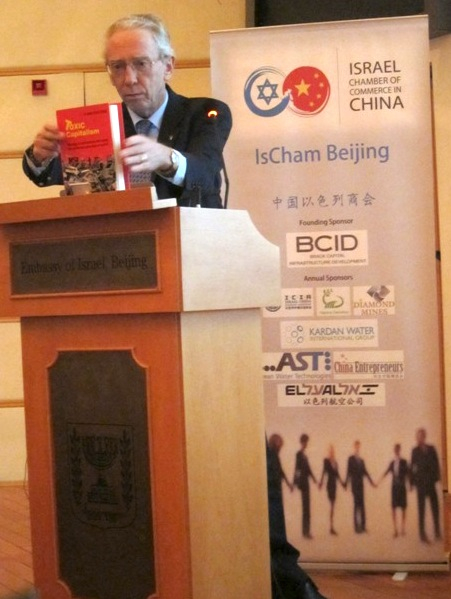 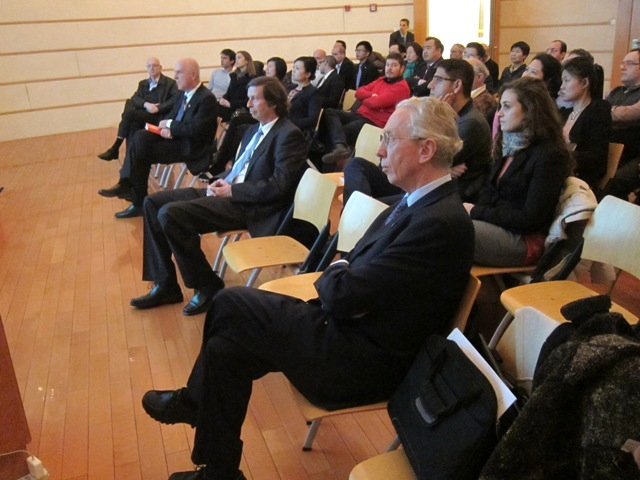 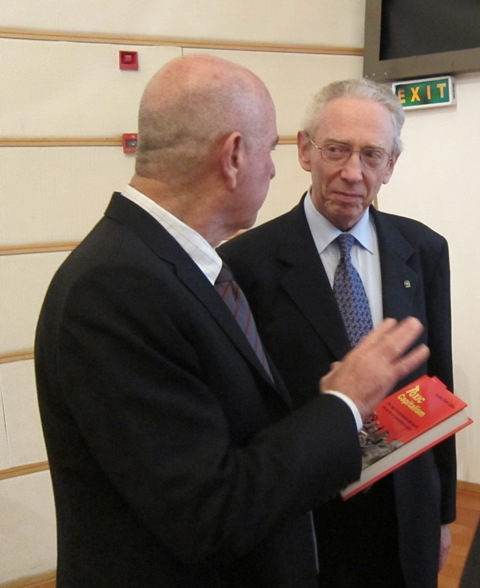 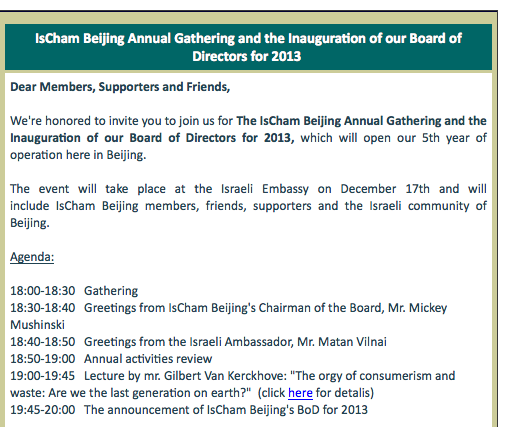 Pictures by myself and by IsCham.

On 27 Nov 12, BritCham and the China-Britain Business Council organized my book talk at Face Bar (Gongti Nan Lu, next to Instituto Cervantes). Five other chambers also joined:  the European Union Chamber of Commerce in China, SwissCham Beijing, Bencham, the Italian Chamber, and the Malaysian Chamber.
It was announced as follows:
“Book Presentation – Toxic Capitalism: Are we the last Generation on Earth?”.
Author Gilbert Van Kerckhove joins us for the book presentation to give us a review of his thought provoking new book, “Toxic Capitalism the orgy of consumerism and waste: are we the last generation on Earth?”
The book centers on the world’s economic, environmental, governmental and social problems and what we need to do to fix them. Living in China Gilbert became alarmed by the dramatic pollution levels and the impact of Toxic Capitalism, an unwelcome strain of capitalism that thrives on over consumption and indiscriminate wastage, promoted by the West with the help of questionable companies, financial institutions and governments. China, as Factory of the World, is facing depletion of resources and roams the world to satisfy its voracious appetite for energy, raw materials, and food. How serious is the environmental destruction? Is capitalism fundamentally wrong? How did we come to this madness, and what can we do to preserve the future of our children?
We need to combat the idolatry of consumerism and fight for our goals: quality & durability, saving resources and energy. We simply consume too much and too quickly: too many gadgets, too many clothes, too many consumer products we either use little or even never at all. We waste too much, including food.
Quality & durability is not limited to consumer products. We need it in governments, services, companies, and financial institutions. We have to change our lifestyle.

Gilbert Van Kerckhove, is from Belgium and graduated as master in electronic engineering. Since 1980 he has been working with China, where he spent 27 years, mostly in Beijing but also in Hong Kong and Shanghai.
He is the president of a Beijing-based management consulting that provides strategy guidance to foreign and Chinese companies.
Since 2000 he has been assisting the Beijing Municipality in the areas of economic studies and foreign investment promotion. He has received the highest Chinese awards for his role in the 2008 Olympics, including the Chinese Green Card. He considers Beijing his home.

I had a diverse audience of at least 35 people. I gave a 60 min. presentation and we then started a lively debate. 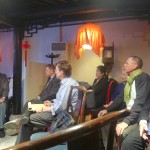 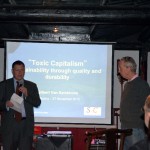 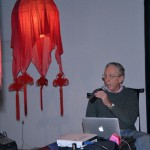 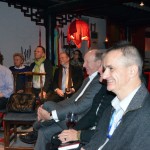 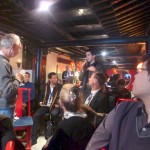 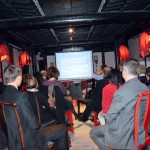 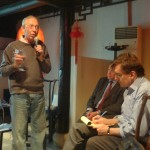 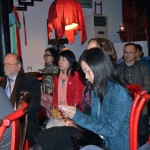 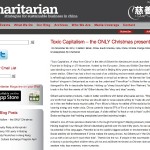 Thanks to Liang Heng (Swisscham) and Clare (DLA Piper & Charitarian) for the pictures.
Clare also posted a very nice review on the Charitarian blog (thanks!):
http://www.charitarian.org/uncategorized/toxic-capitalism-the-only-christmas-present-to-buy/
I had brought some few copies and they were all quickly gone.
Thanks to Hayley Thomas and Russell Brown for the logistics and hosting me!